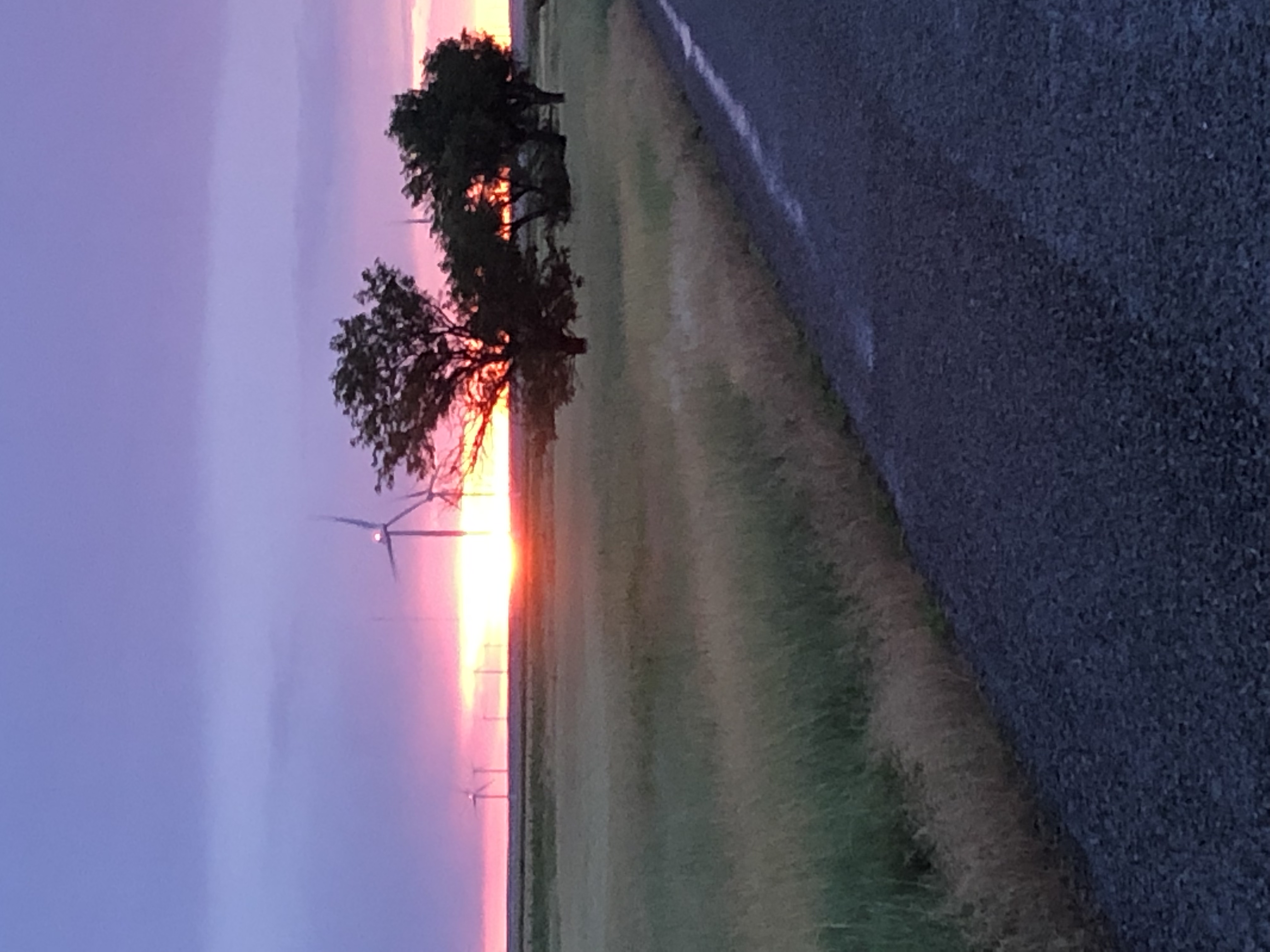 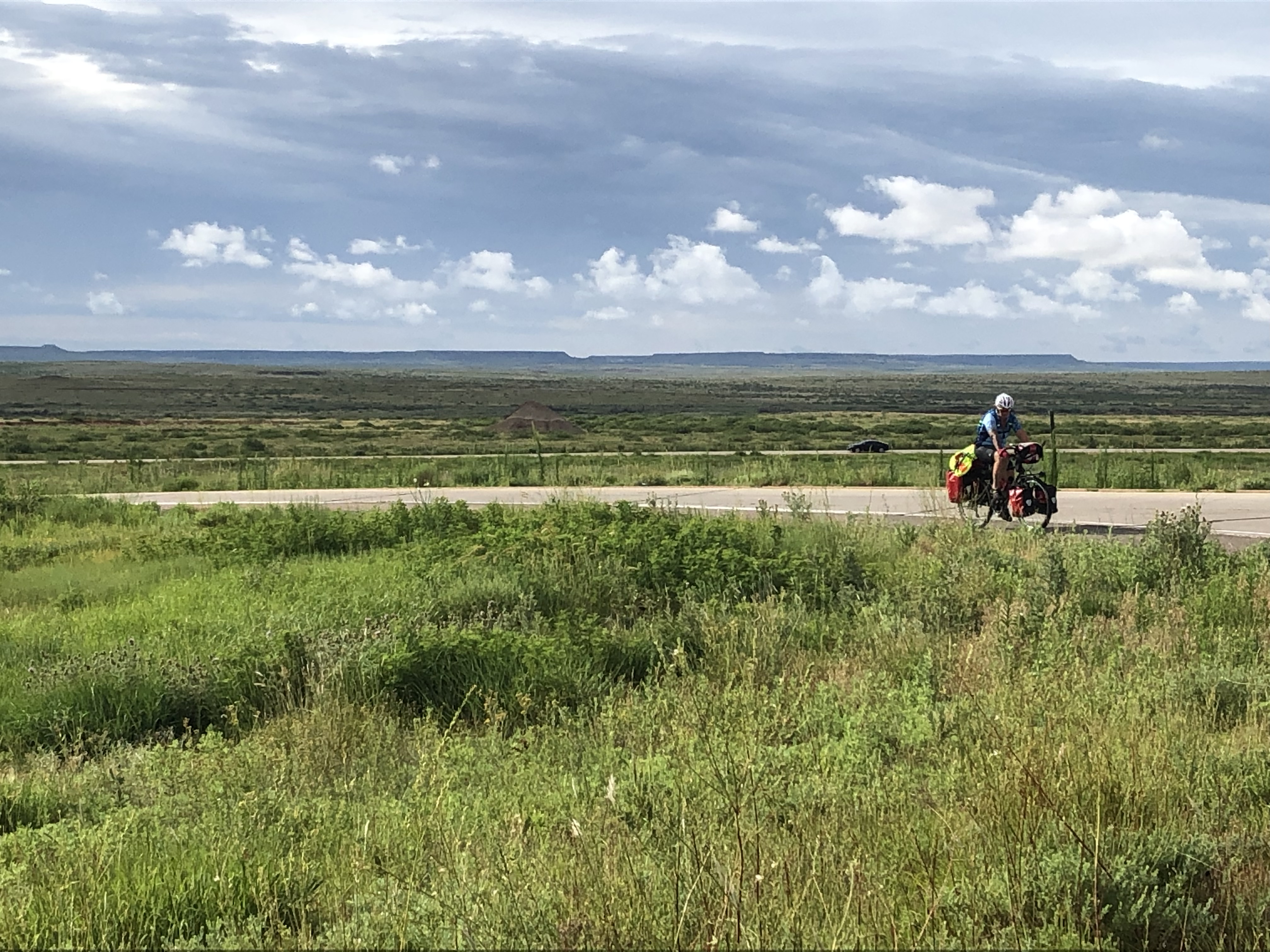 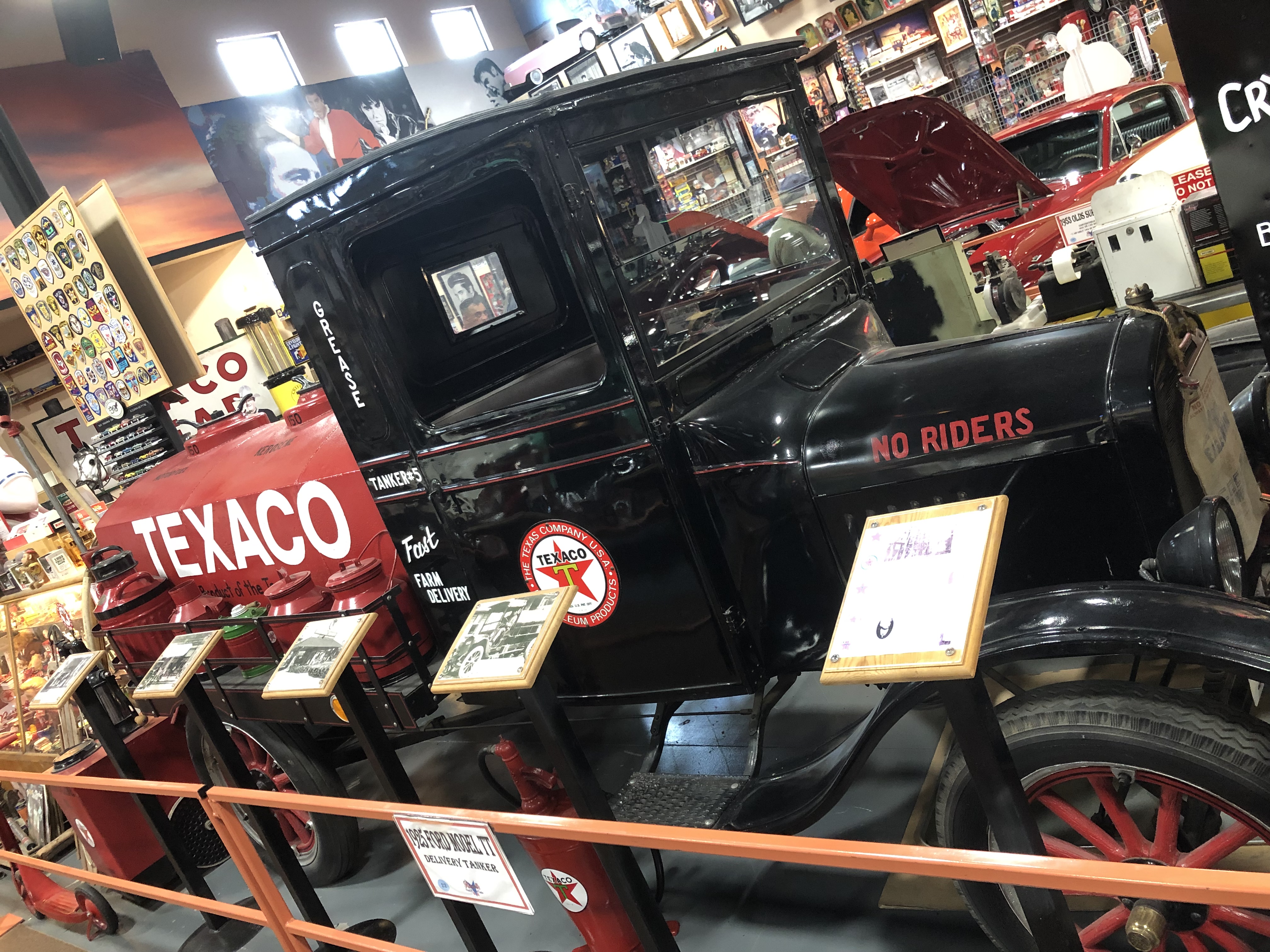 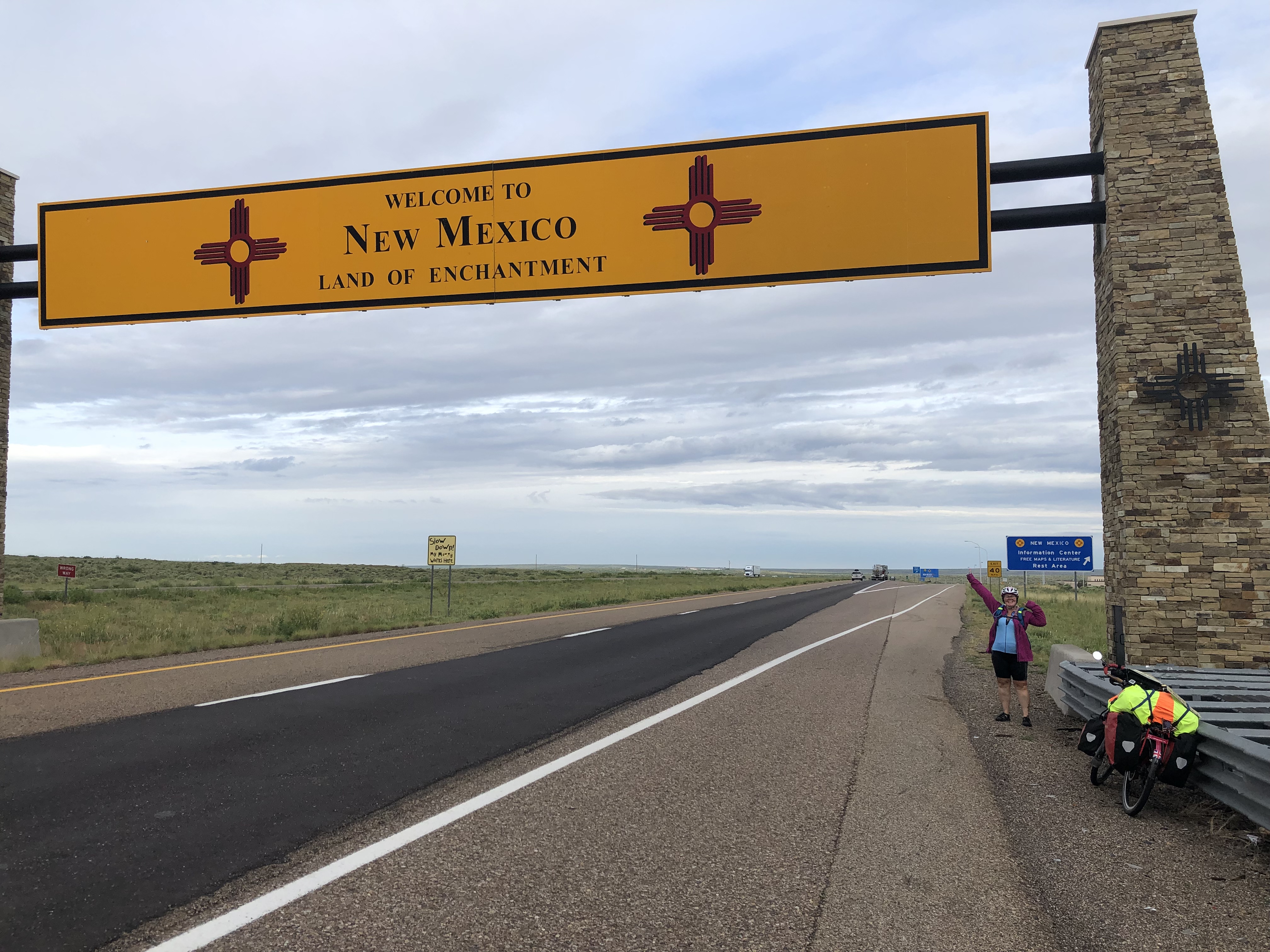 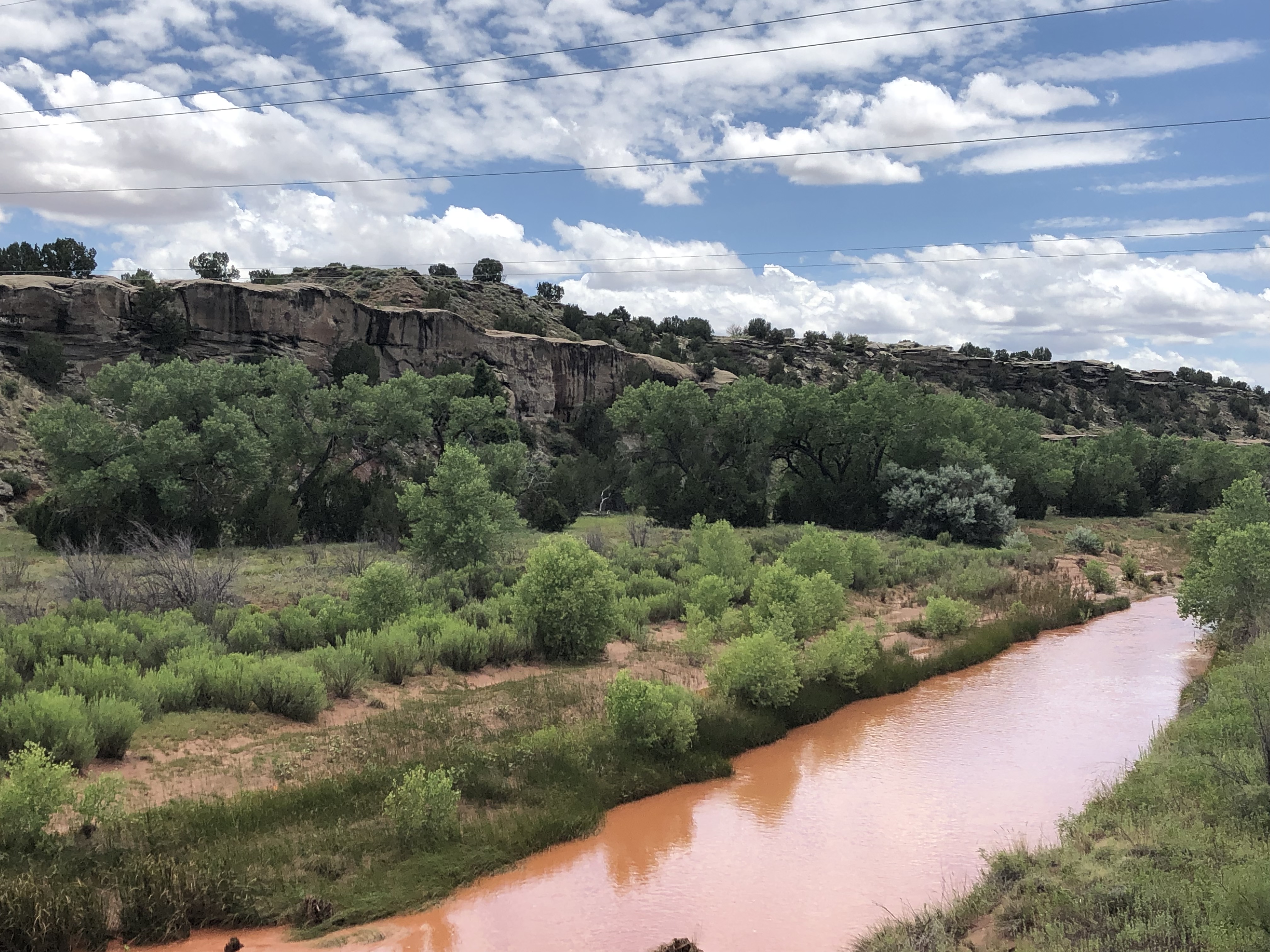 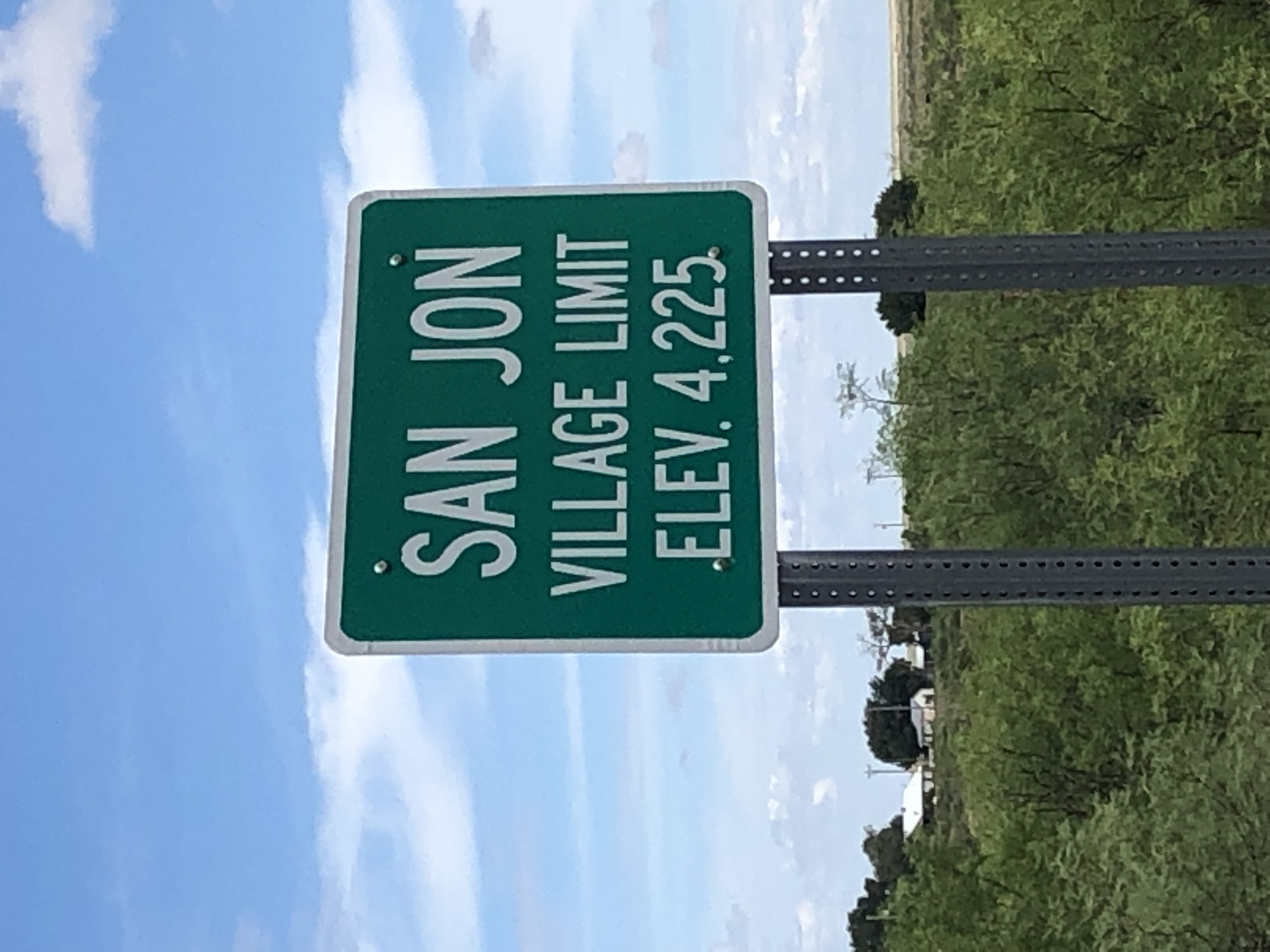 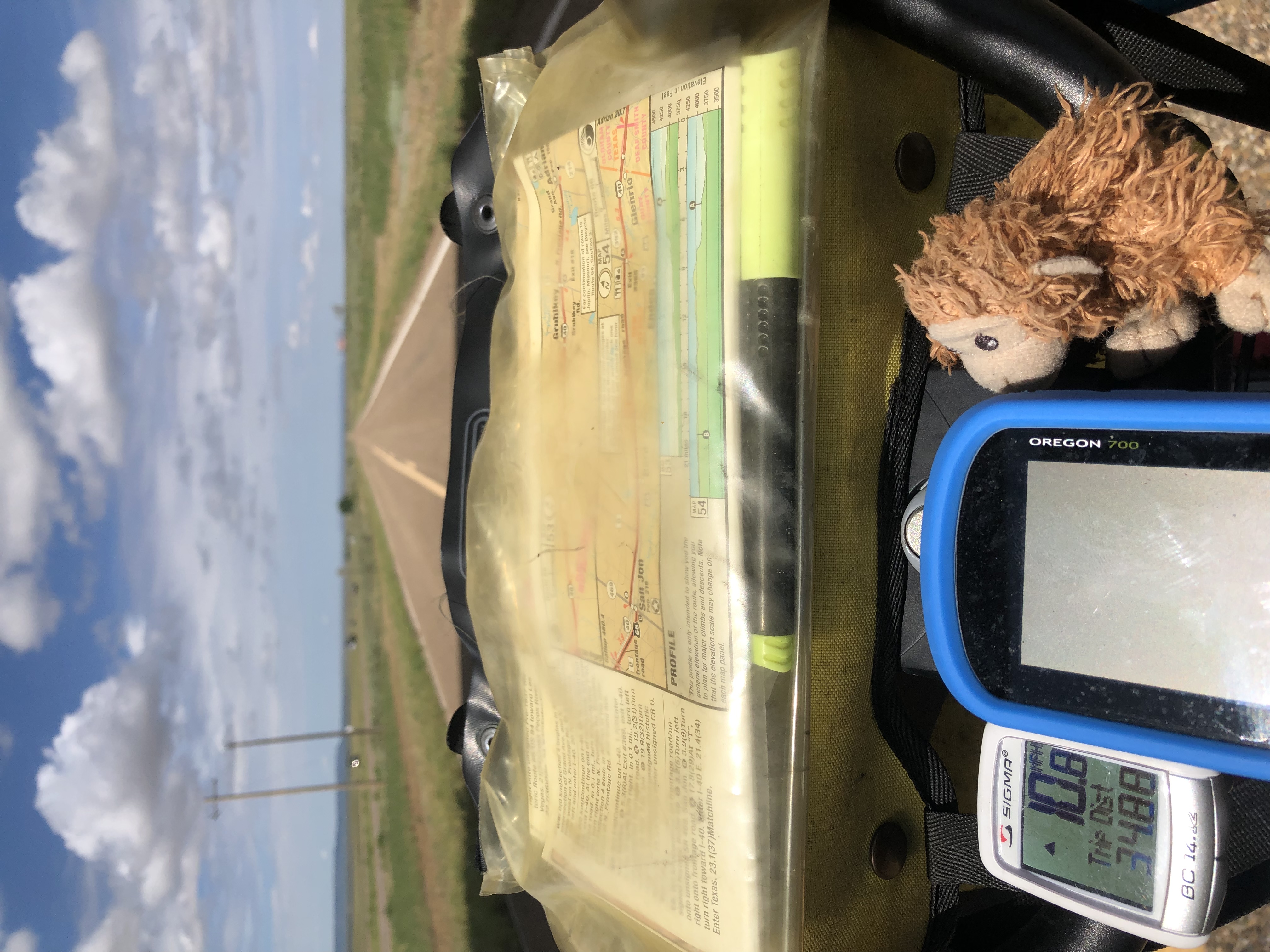 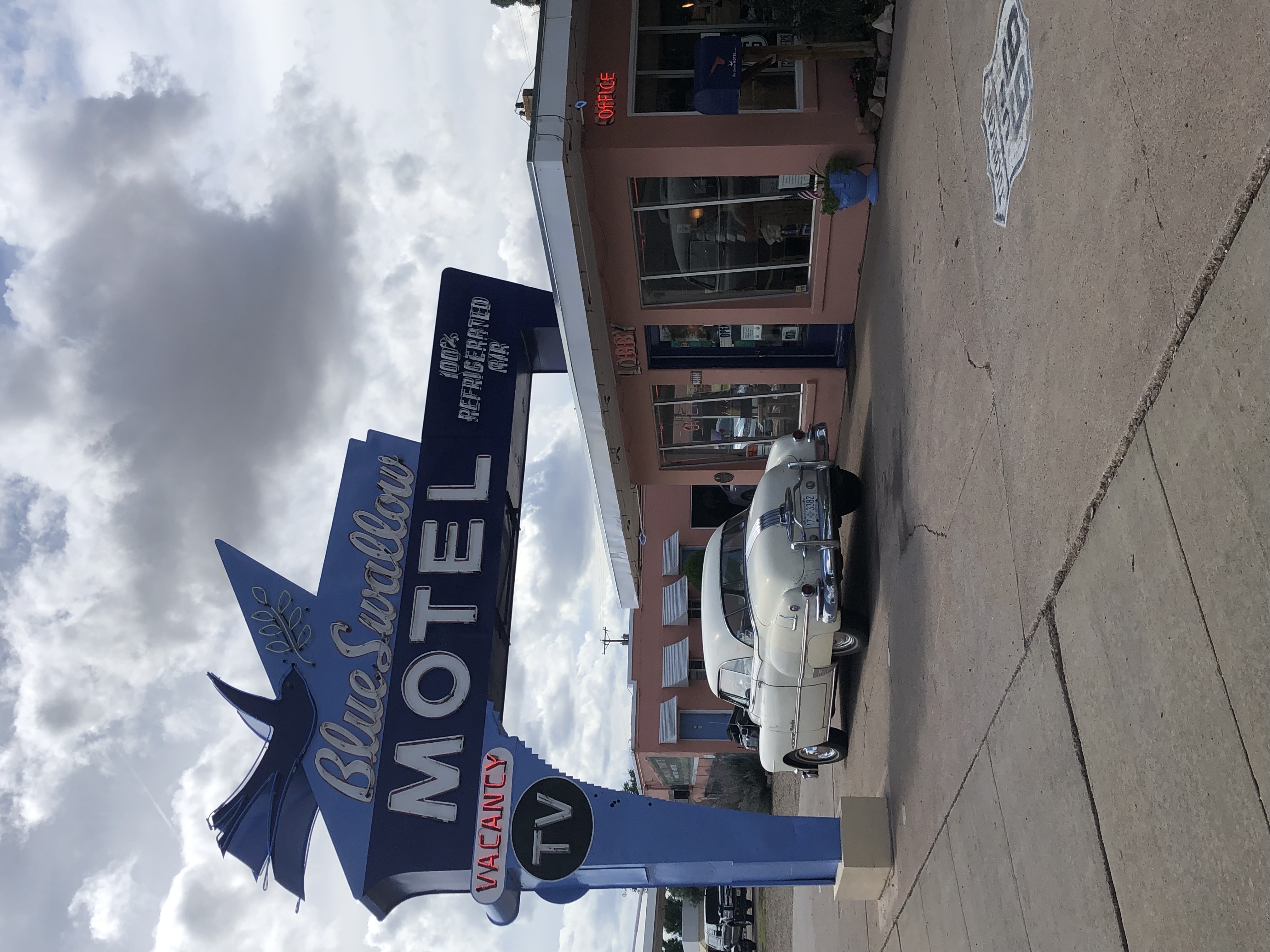 The weather turned really bad in the night. Massive storm, we were on heigh alert in case we had to abandon the tent. We were to far away from shelter so everything in the tent was packed away and we sat there waiting for it to pass. All night storms at 7 am in the morning we decided to get going it’s still raining hard and the tent is saturated it will have to dry out tonight, but at least the lighting has stopped and the wind dropped. 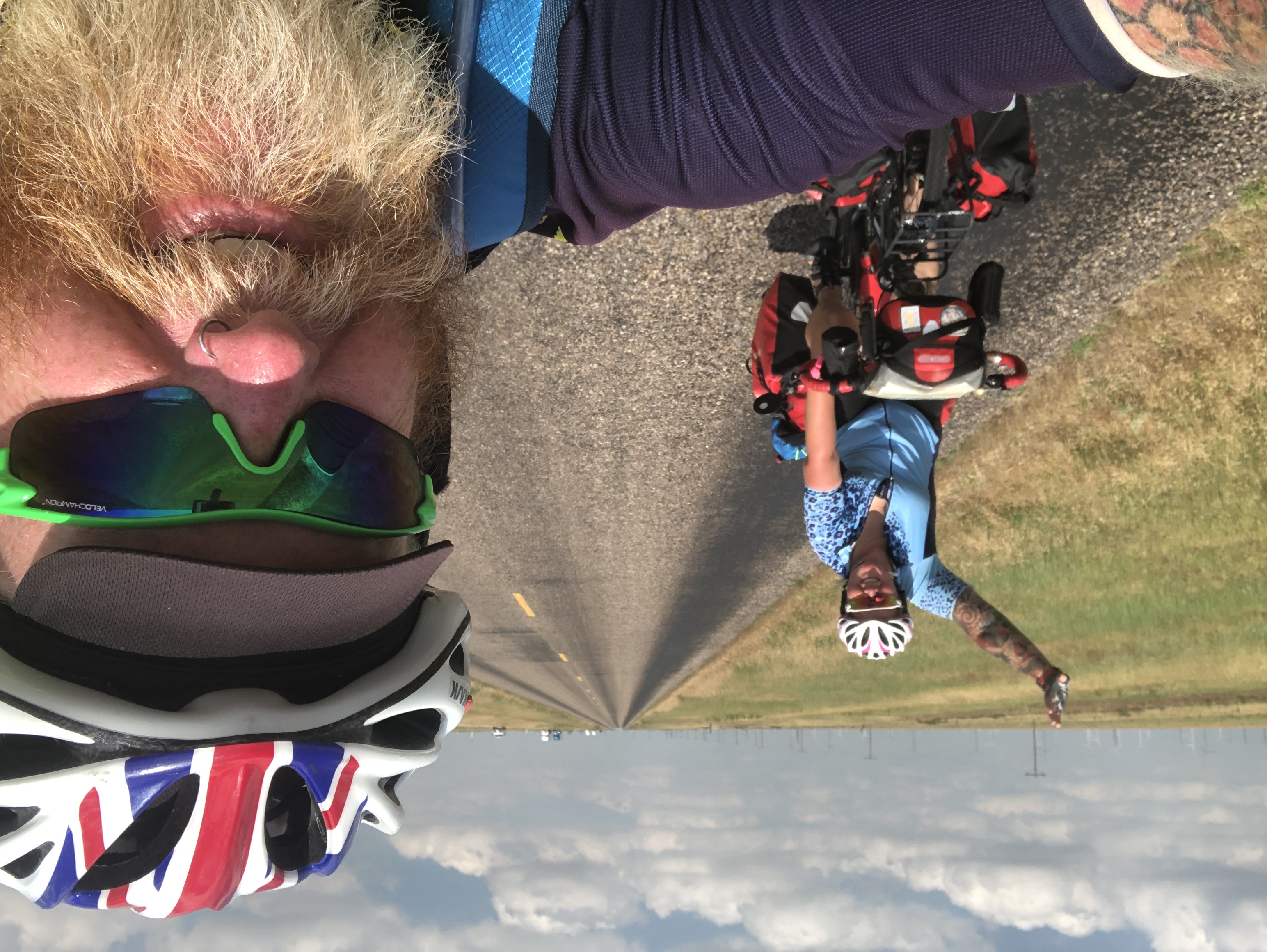 60 miles to Adrian nothing in between. The rain stopped at midday and we had a slight tail wind so not to bad a day all in all.

Adrian is mid point on Route 66 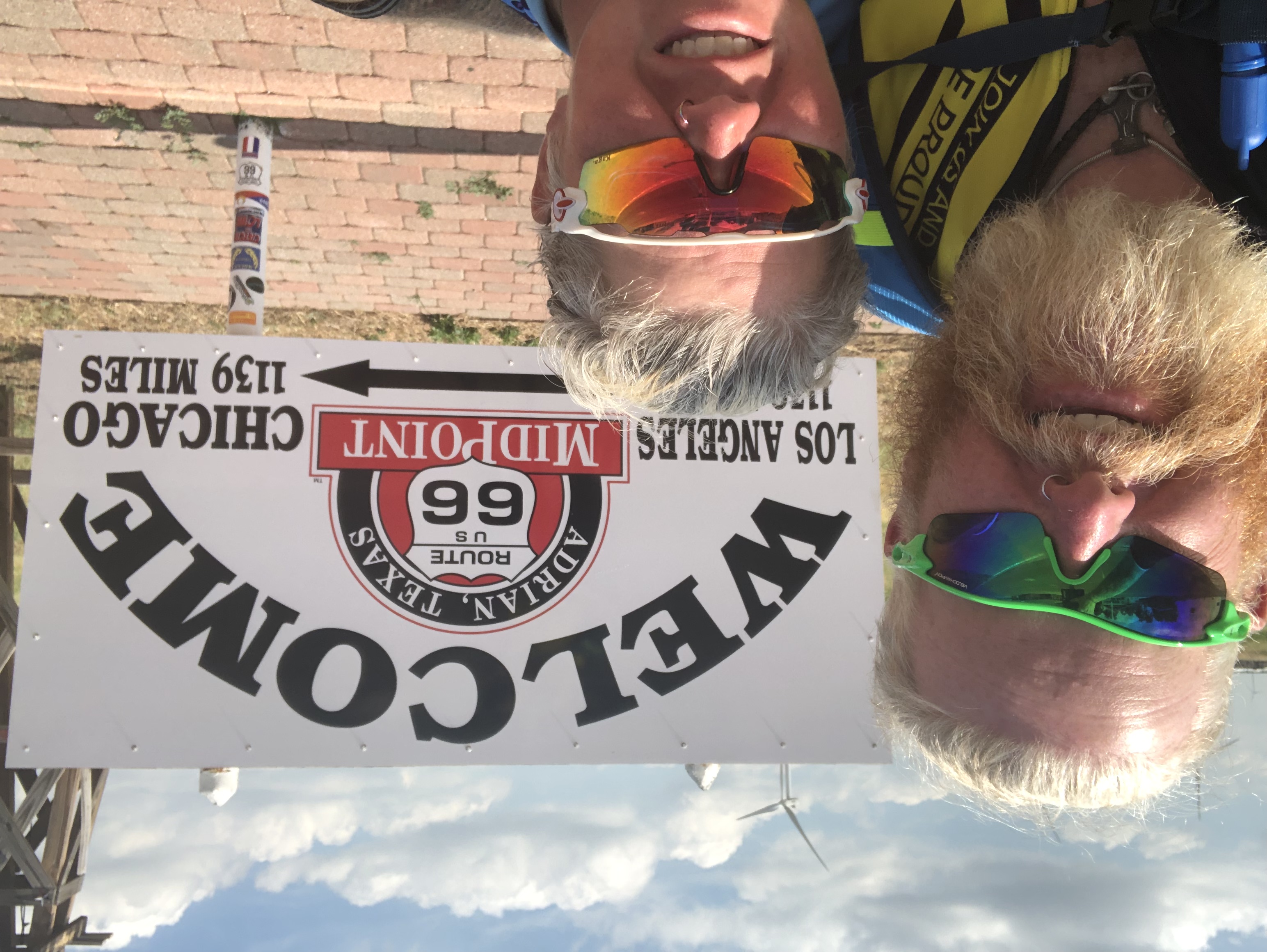 A small town the cafe is Disney’s cars flo’s V8 cafe. In real life it’s mid point cafe and used to be owned by Fran Hauser and is famous for their ugly pies. We had to try one. 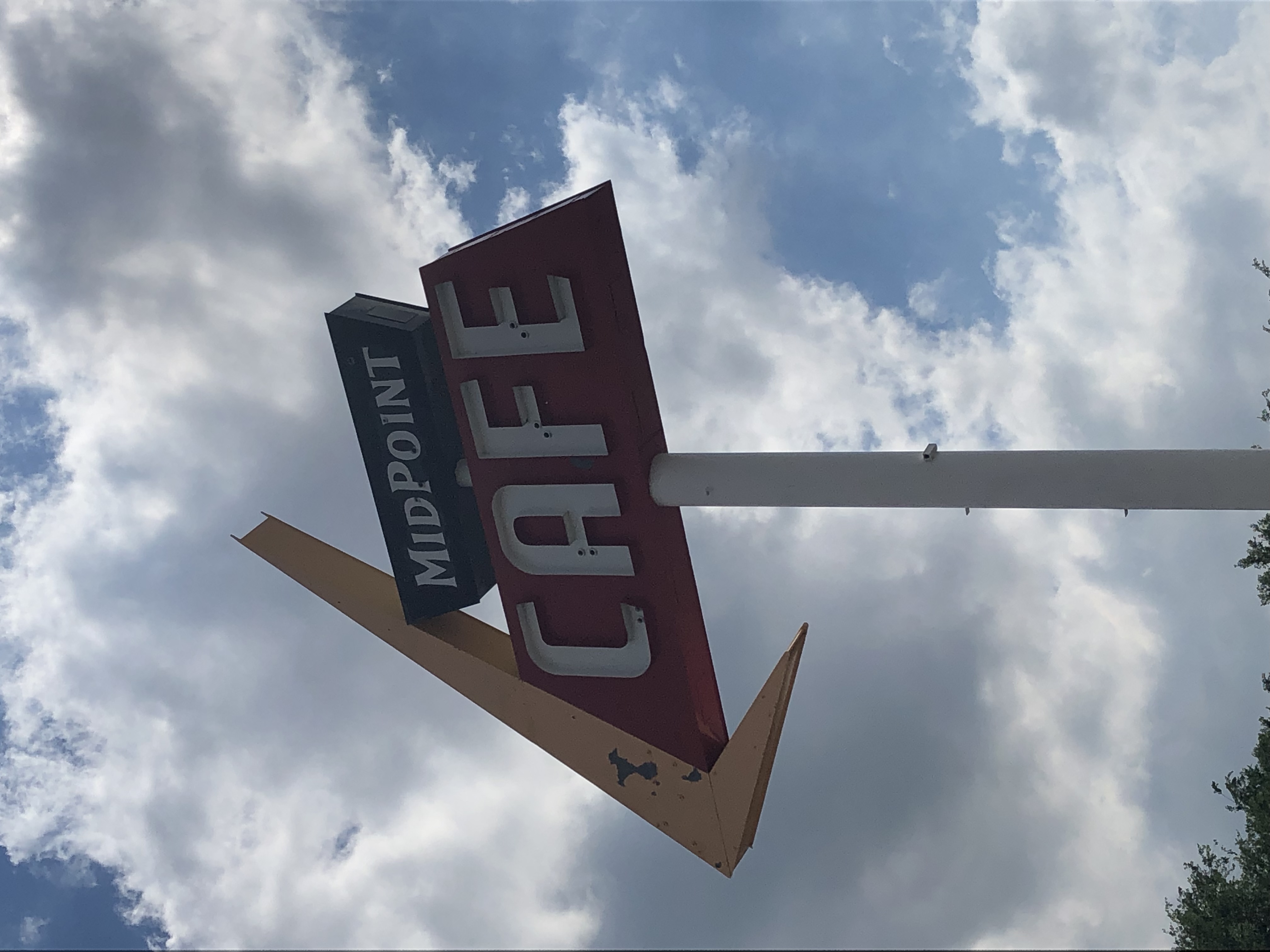 The RV site is just opposite and is run by a really nice guy who has concerns about the weather tonight and has said any problems just knock on his door or sleep in the laundry room. So let’s hope we get some sleep tonight.

Day off today. Spent the day catching up on washing, buying bits and bobs in the local Walmart and bike shop. Should of been a easy day.

So last night we treated ourselves to a meal at the big Texan steak house. The RV campsite were staying at has a free limo service there and back. I have the bank card for the account that we’re using, so give my wallet to mike for the evening and off we go. 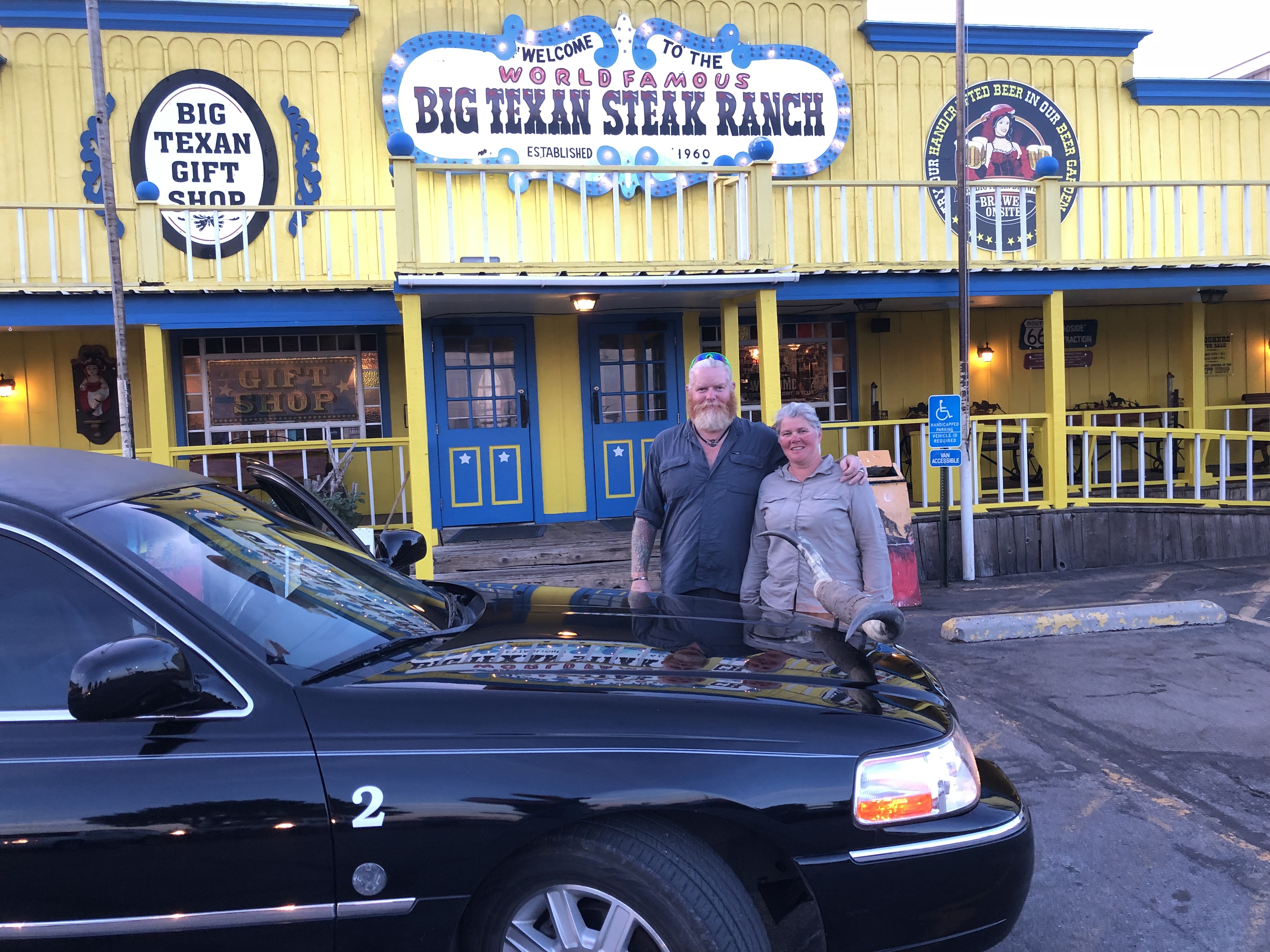 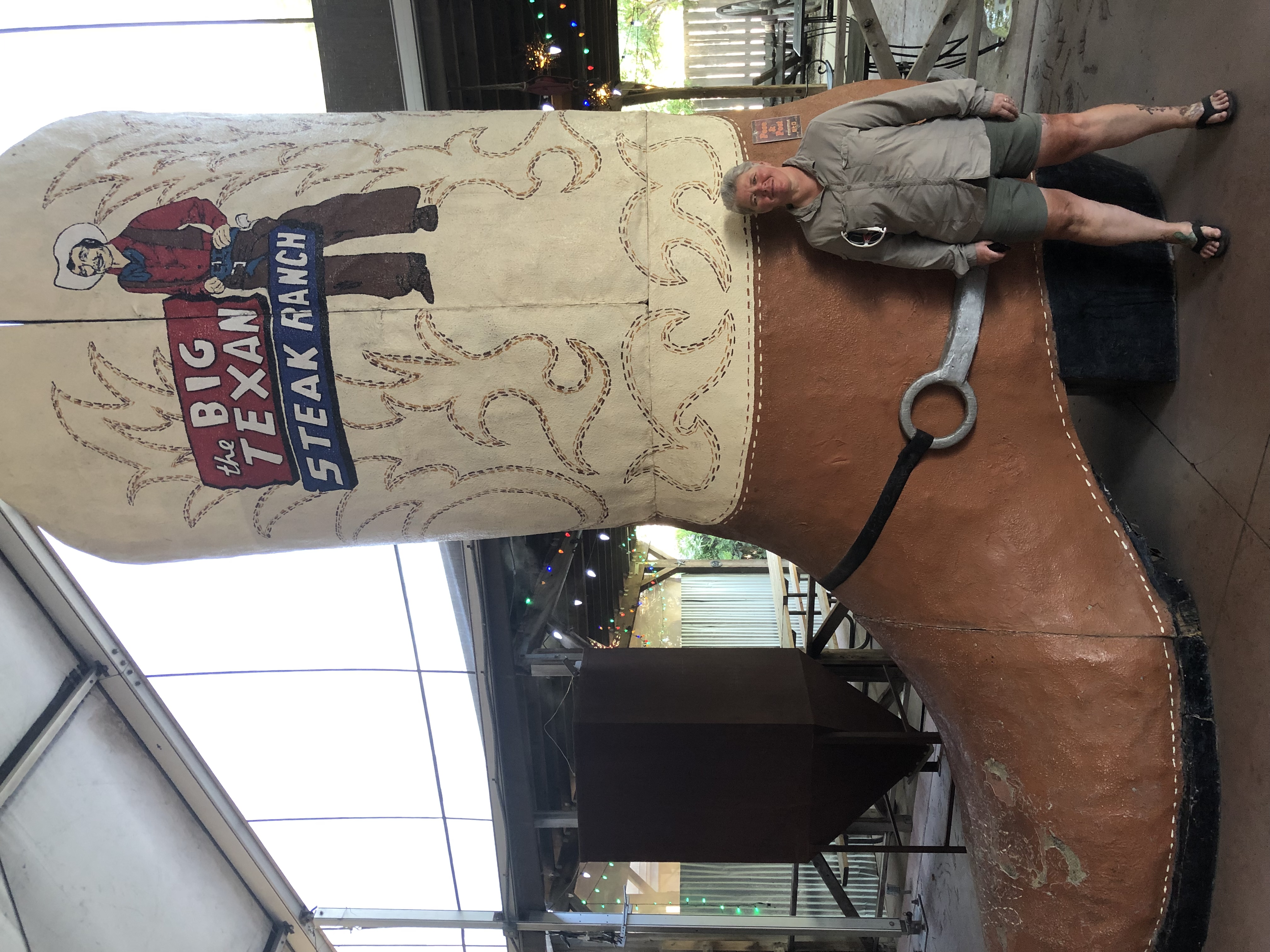 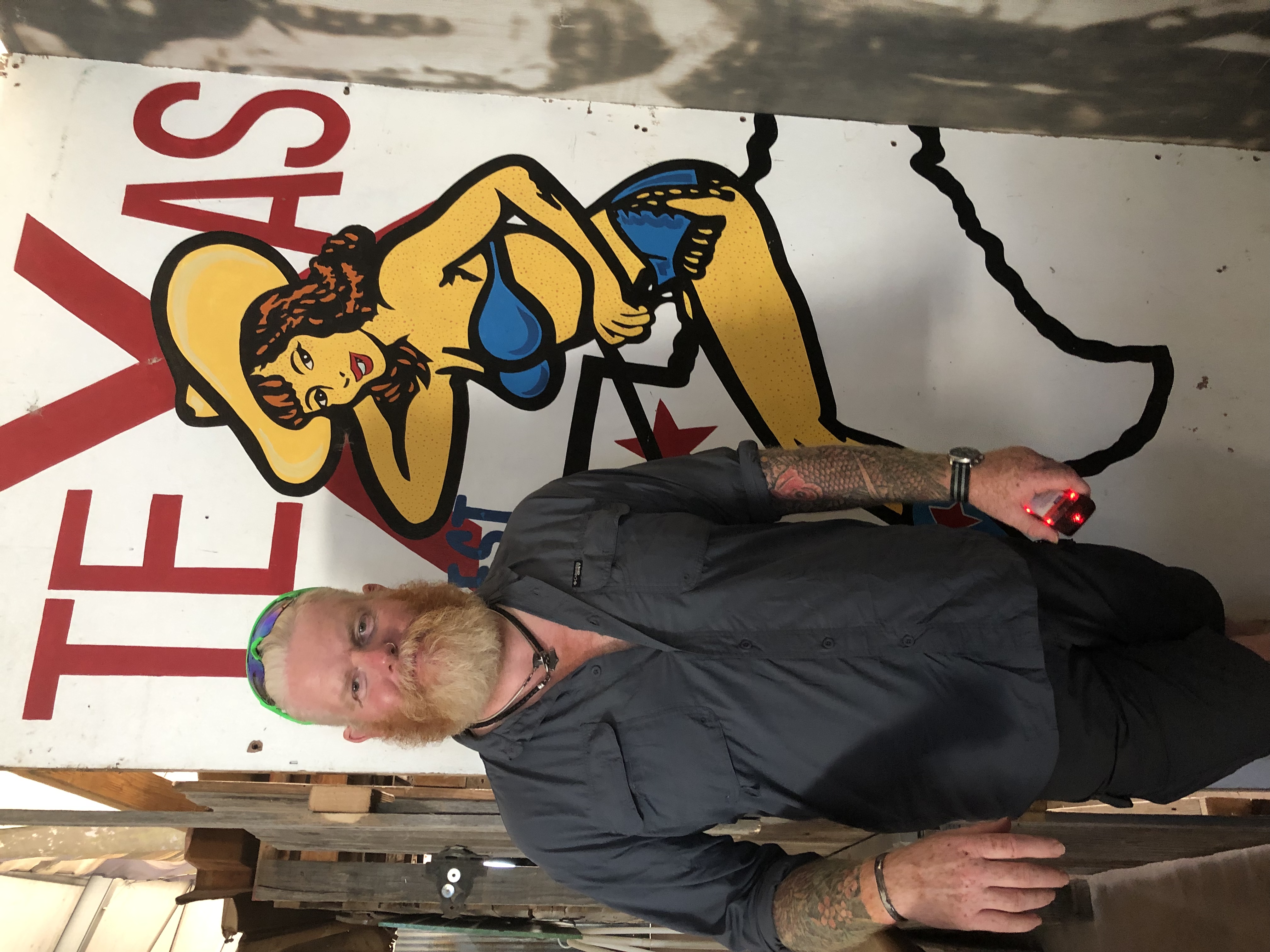 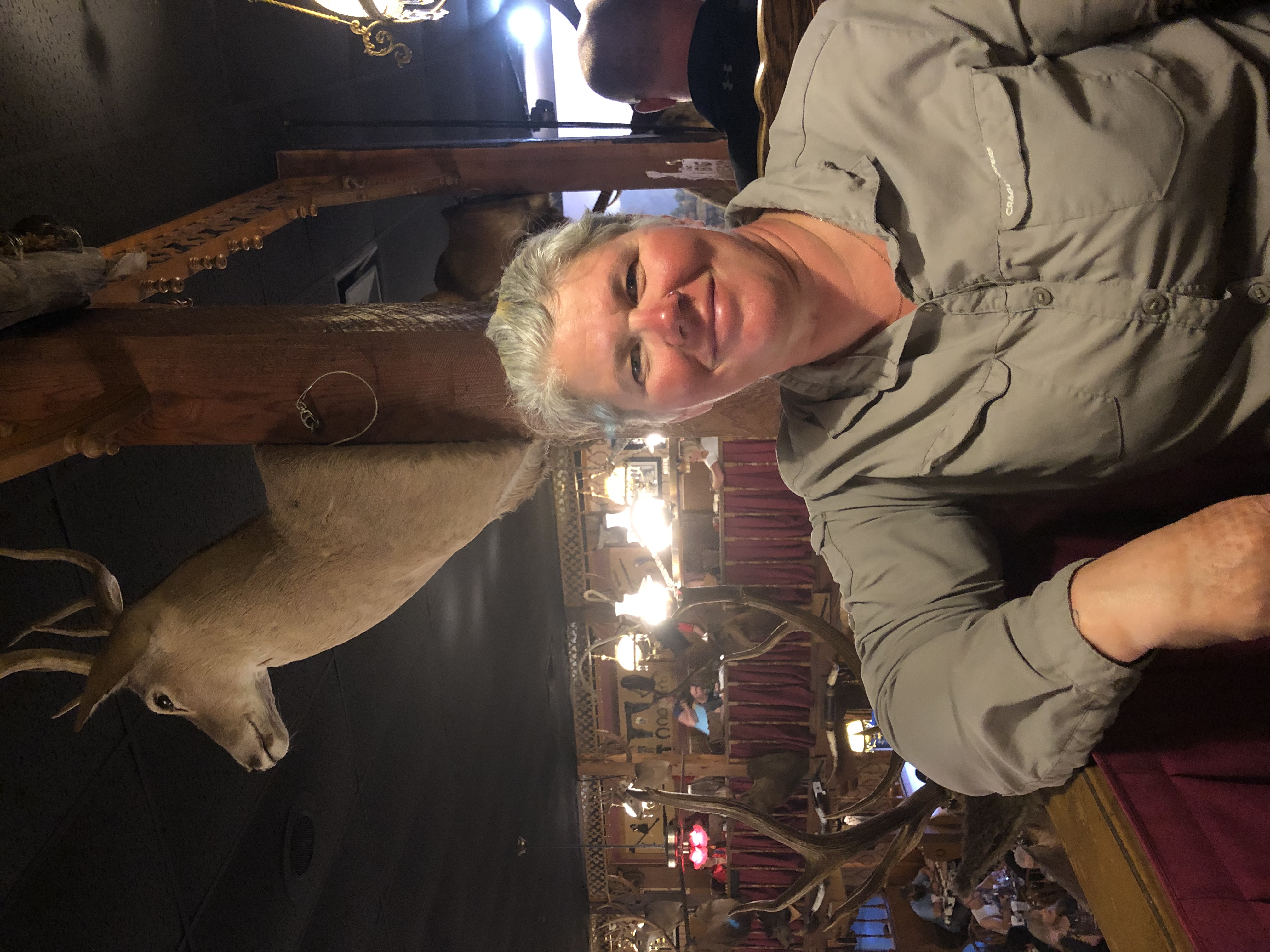 They have a 72 oz challenge if you eat it all plus all sides it’s free. No chance of either of us even trying. 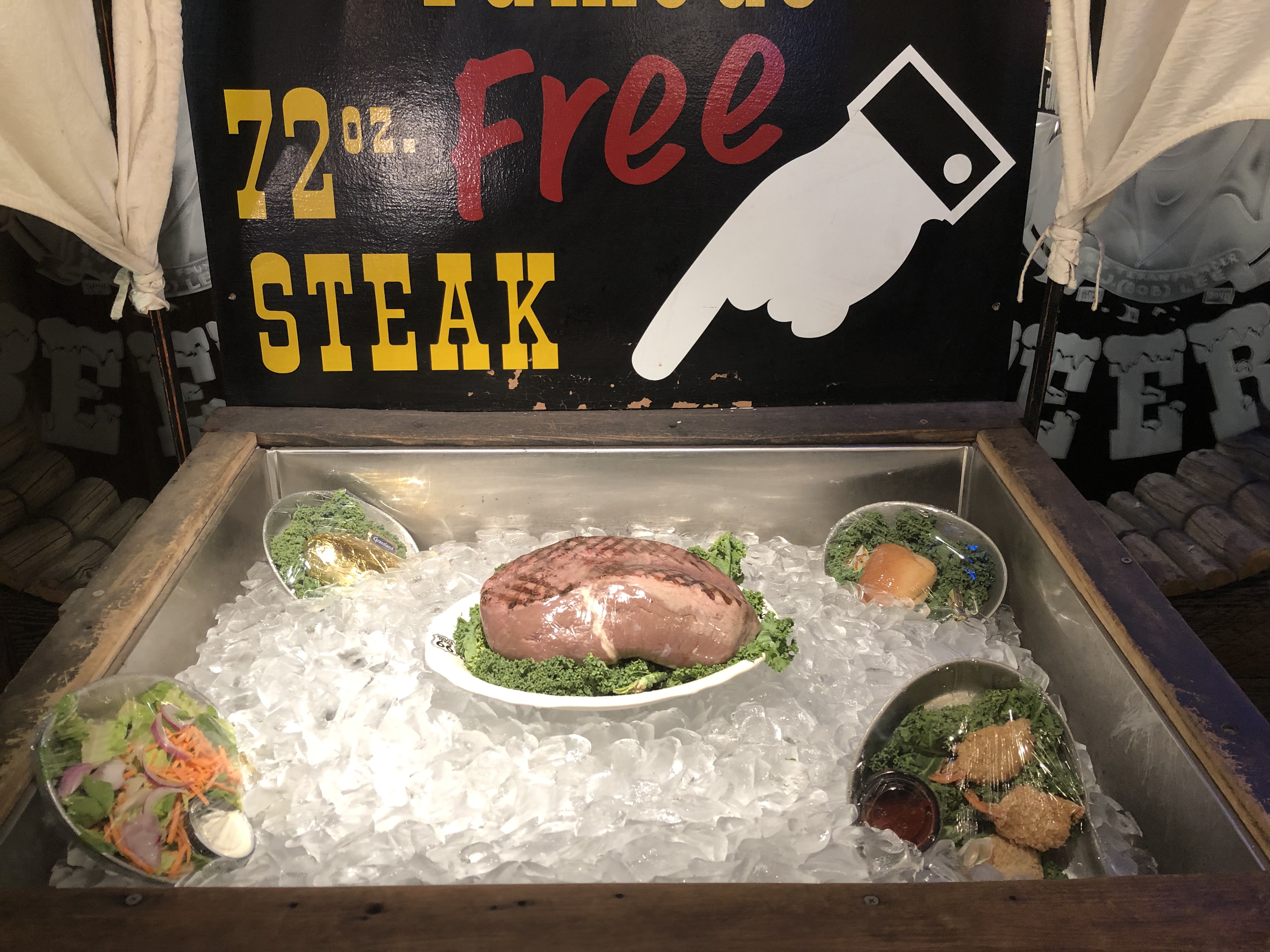 So a good night out, mike has my wallet. We get up and get ready to go to the nearest bike shop just over 7 miles away. I ask mike for my wallet and he said that he’d put it in my handle bar bag. Perfect that’s where I keep it. I trust him no need to check. Now before every ride I always check I’ve got my wallet and phone, I’ve got Apple Pay on said phone encase there’s a problem with the card. Not today we’re in a safe campsite so I leave my phone on charge in the tent.

After a hot ride we arrived at bike shop, Mike has had problems with his seat so we got the tech guy to change the nut/ bolt thing that stops the post from dropping. Pick up new gloves each and some chain oil and go to pay. Bum I open my bag and in it is mikes wallet not mine. He has a card for another account that we haven’t used I guess we will just have to pay from that account. Card declined sh1t we can put goods back but they have already fixed Mikes bike we owe $5. Nothing for it we had to cycle 7 miles back to camp. They kept Mikes driving licence. PersonallyI think they could of let us off $5 after we explained our situation but no. I’m a slow cyclist so after we got back to camp and Mike found my wallet out of he’s shorts pocket I sent him back by himself. Not that I’m blaming him much!

While he did a nice hot 14 mile ride I relaxed in a air conditioned room and read a book.

The rest of the day after he got back was Walmart, swimming, hot tub and a lovely family in the evening feed us.

America is celebrating Independence Day. Independent from us the British time to tell everyone that we’re from Australia, they get our accents mixed up anyway.

We left our campsite by the cross nice and early a good photo opportunity in the sunrise.

The 1st stop today is slug bug ranch. Created in 2002 five wrecked vw beetles buried hood down into the ground by the crutchfield family to attract customers to their gas station when a huge corporate travel plaza was built close by. Unfortunately it didn’t work and they closed down a year later. It’s now left to deteriorate. A sad site.

So destination Amarillo for tonight. There is literally nothing in between 30 miles of following a frontage road on interstate 40. 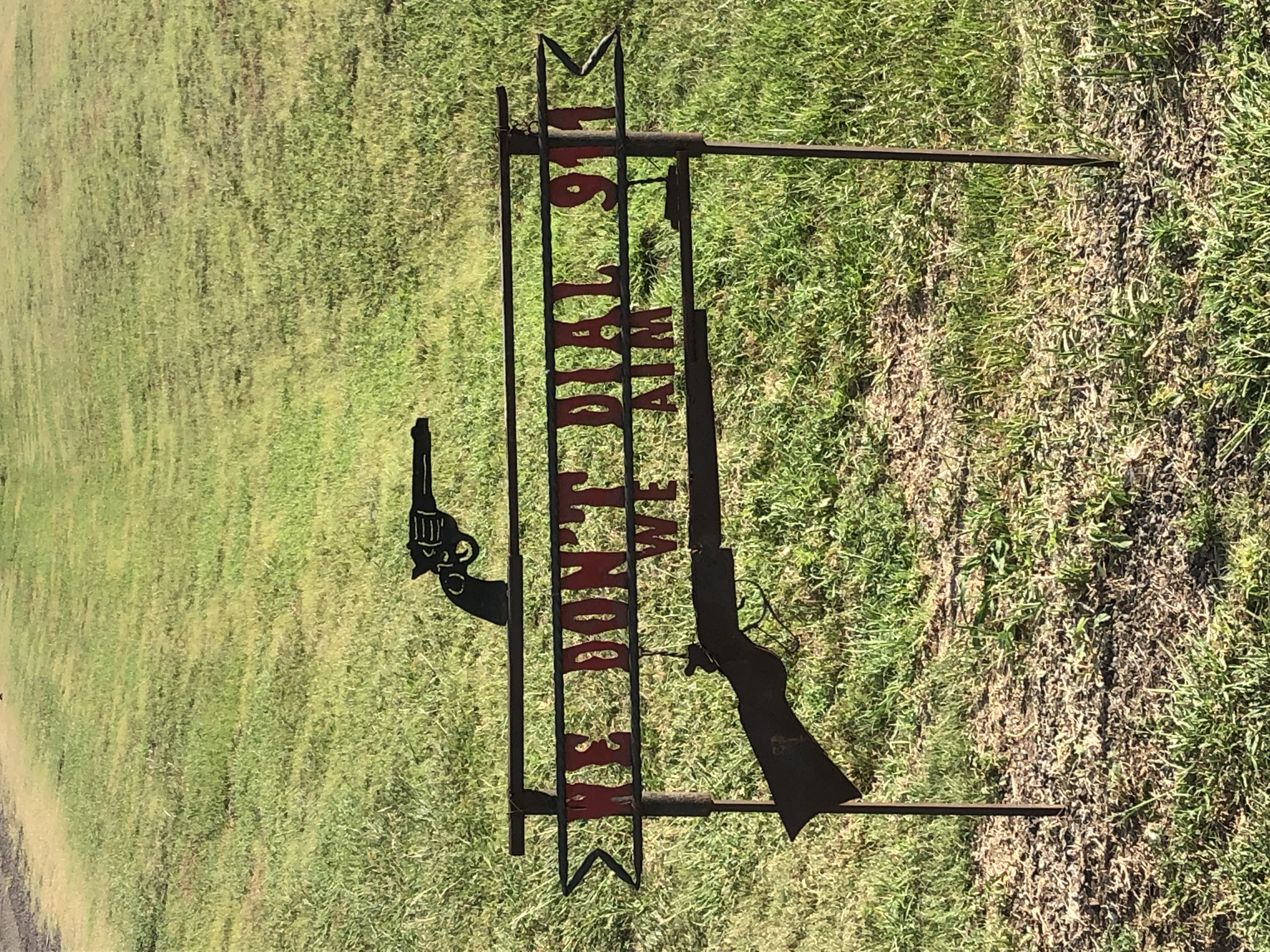 In someone’s front yard they also had two revolver b b q’s that they made for sale.

Funny enough this wasn’t far away from it. 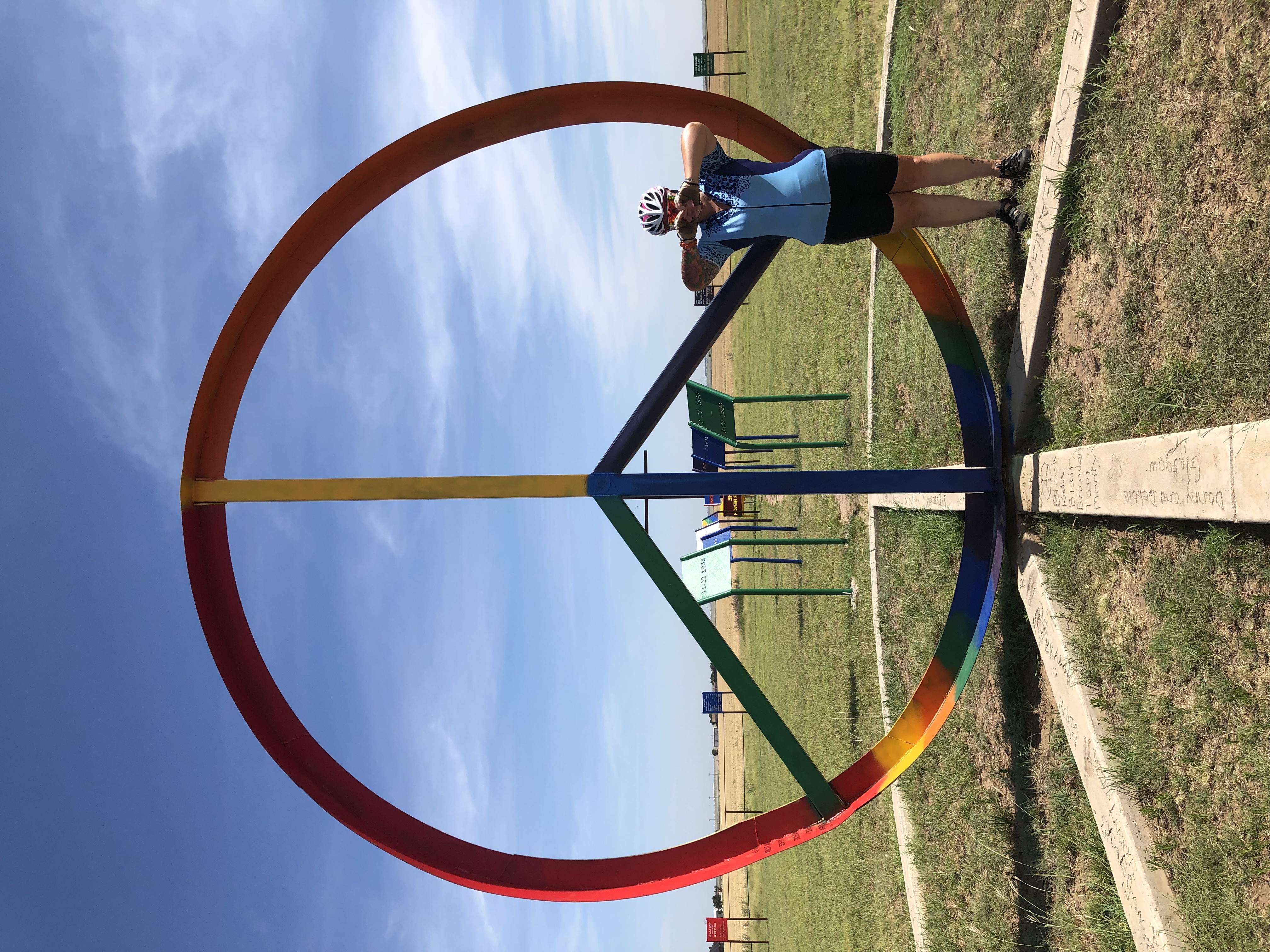 We made it nice and early 12:30pm so a nice afternoon to relax. We are in the busiest site yet cramped on to a small tent site but I guess it’s a four day weekend here starting today hopefully we will see fireworks etc tonight. 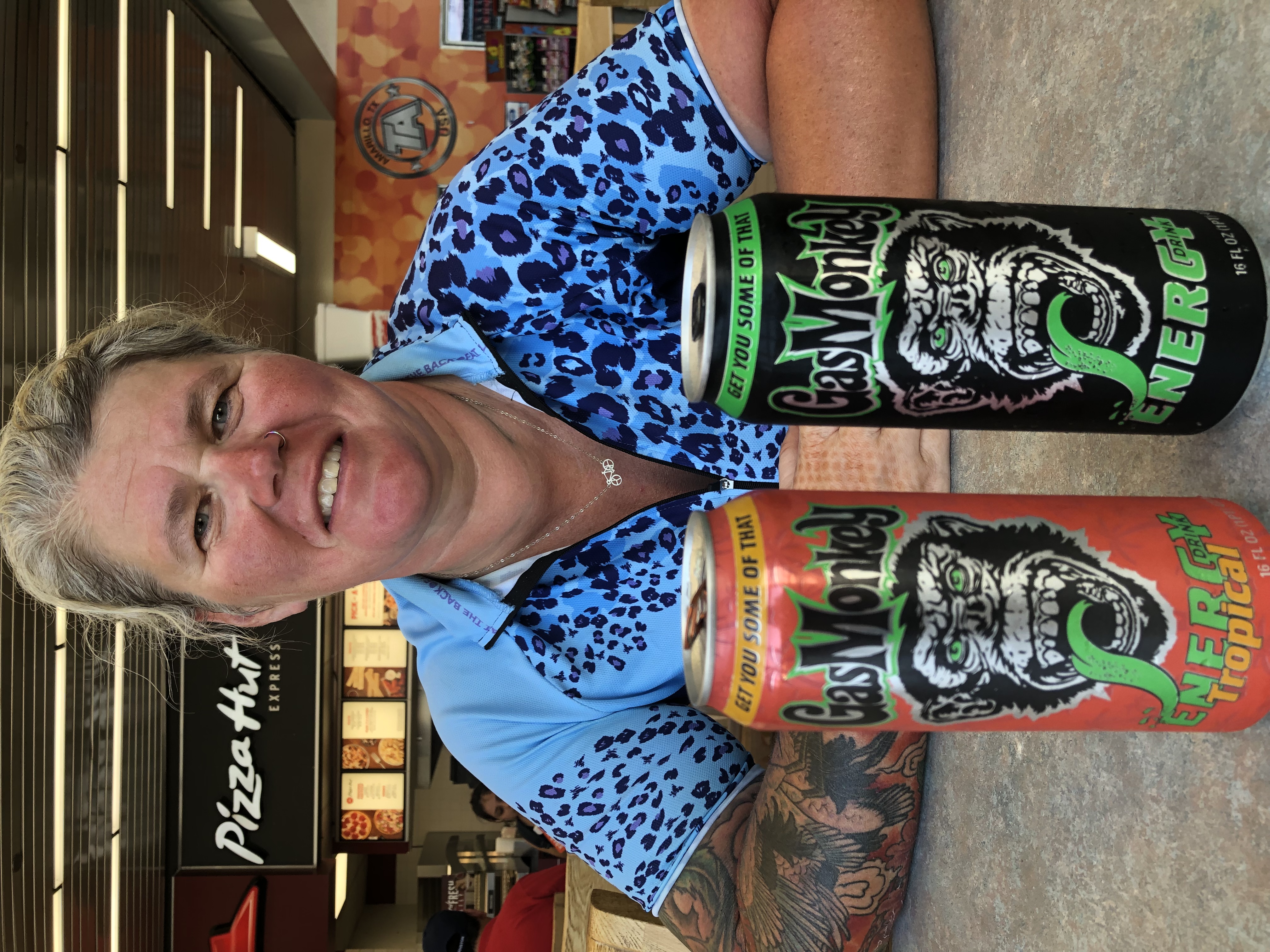 Texas energy drinks. We needed these today, well maybe not just thought we would try them.

We actually got our asses out of bed nice and early.

It’s nice cycling in first light a lovely time of day. A long ride to do today as we have decided to be in Amarillo tomorrow for the Fourth of July celebrations.

Not much in between stops again. A old cottage style gas station in McLean.

We 55 miles into Groom where there is a big cross that we’ve been told that if we go to the visitors centre there and ask nicely we will be able to camp there. So currently in a Dairy Queen a mile away. Food and internet to pass some time as we don’t want to put a tent up under the cross whilst people are still visiting it. 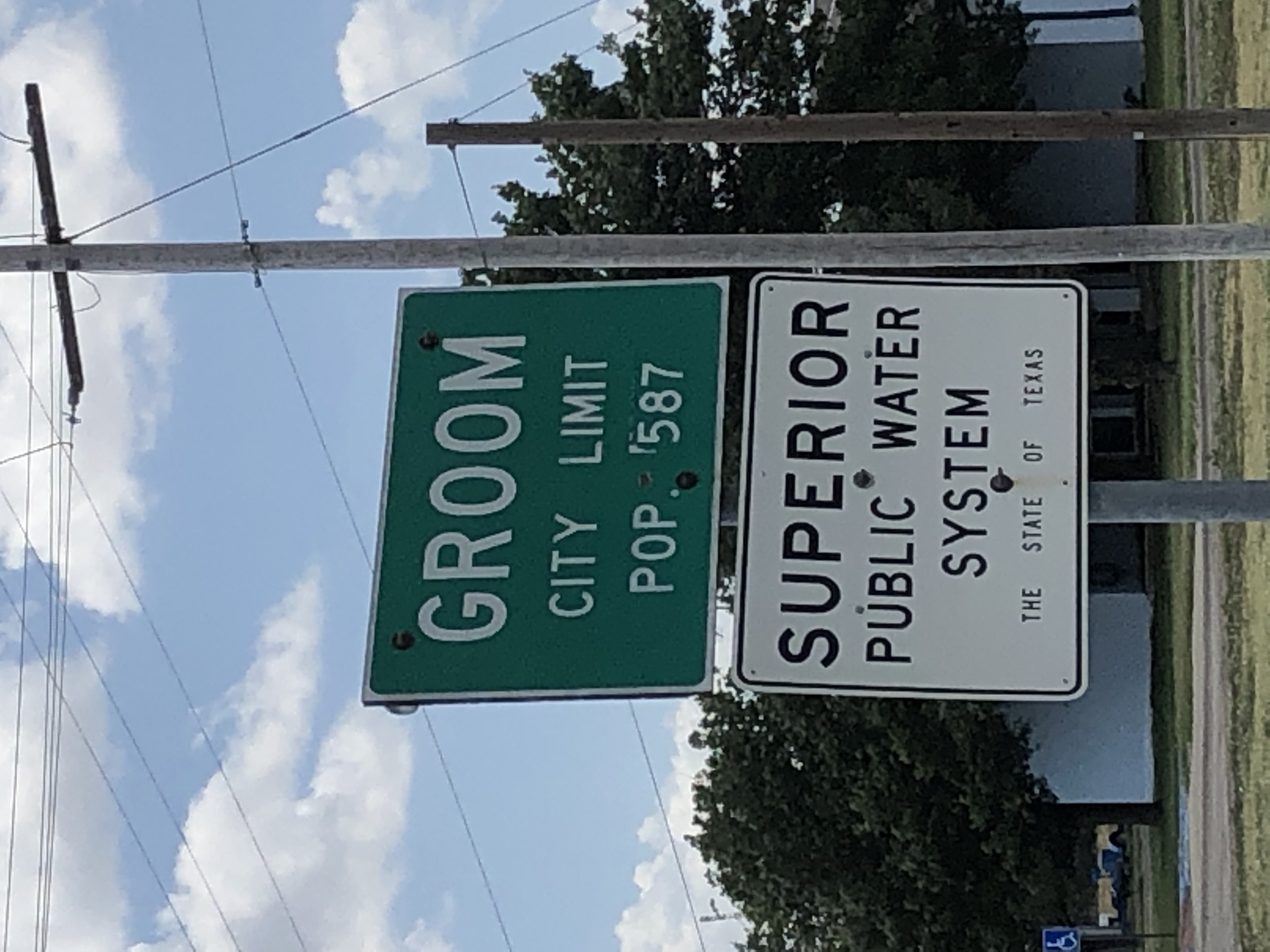 Day off. We are both tired so when the alarm went off in the morning we turned it off and turned over and went back to sleep. That’s the trouble with comfortable beds and aircon.

At 10:45 am I woke up and realised that check out was 11:am. Gave mike a shove to wake him. We both didn’t feel like hurrying and cycling out into the midday heat. Lazy I know but instead I went to reception and paid for another night.

We explored the town which didn’t take long and spent the rest of the day sleeping and watching back to back criminal minds.

New day, New month, New state. A little bit of a lay in today not planning to do big miles there’s a campsite just 26 miles away. A leisurely morning and breakfast at Denny’s meant we didn’t start cycling until 10 what’s the hurry.

Passed Eric home of The 1st Magnolia garage in Oklahoma, it’s just a ruin now but so is the whole town. 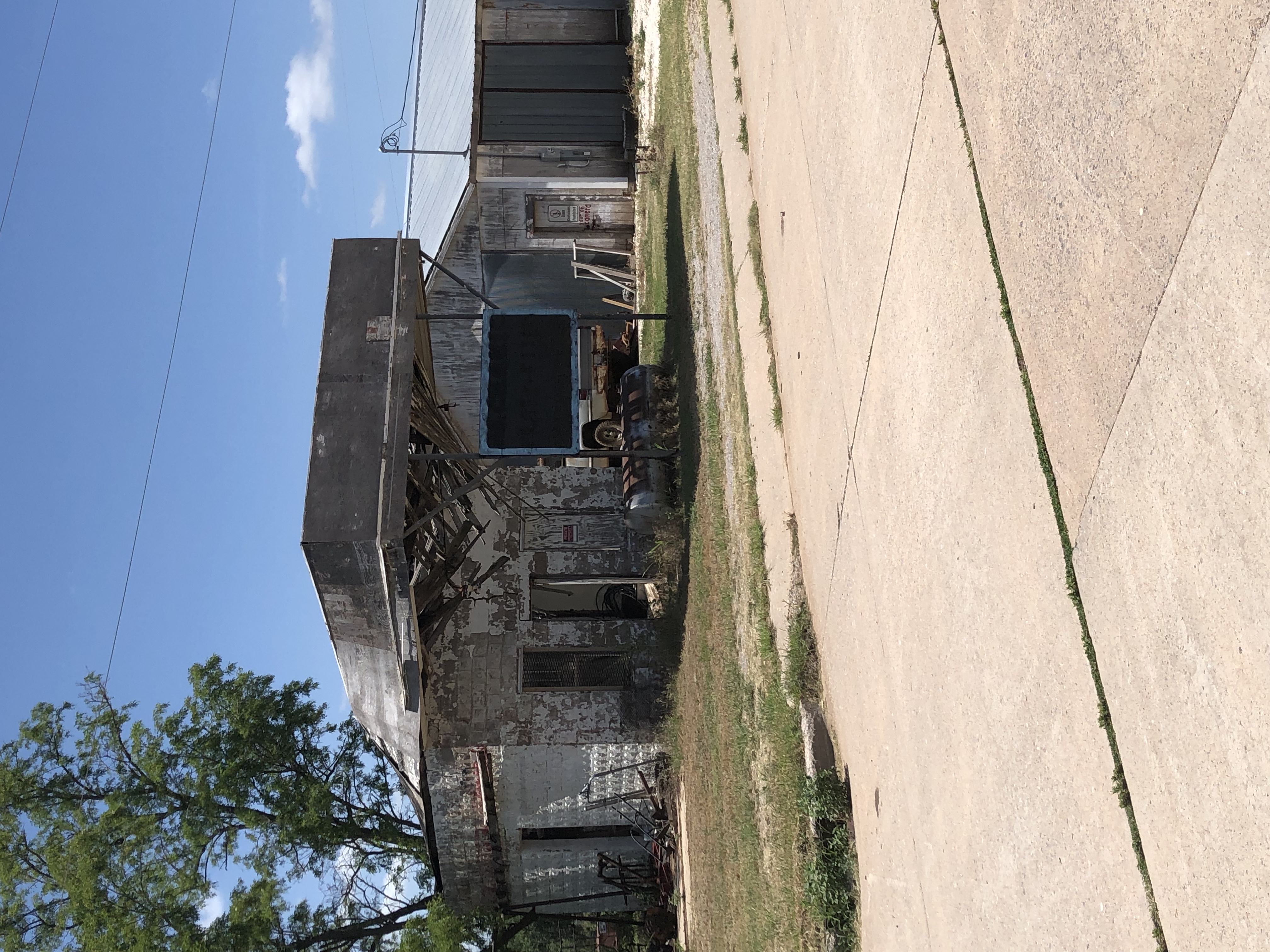 And lots of old abandoned cars. 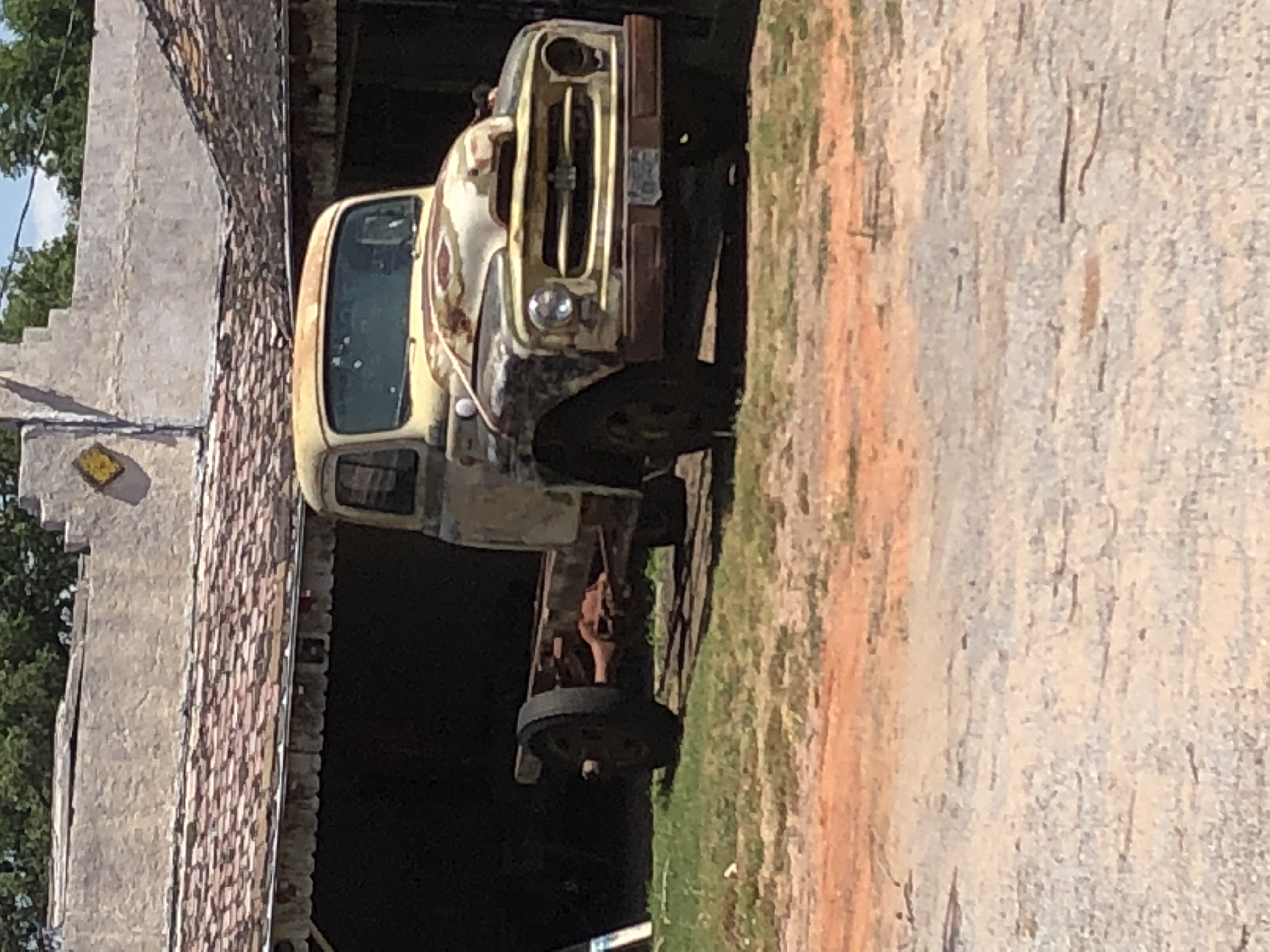 Next town Texola. So close to the Texas border that indeed it was once in Texas. It’s population now is reported to be 35, but it still has a open cafe and petrol station. We cross the state border into Texas and head to shamrock where our campsite is for the night. A RV site unfortunately there are no wash room facilities so again we ended up in a motel. Apparently Elvis Presley stayed here and ate in theU-drop inn. A beautiful Art Deco cafe opened in 1936.